VACOped – The New Standard for Managing Foot and Ankle Trauma

The VACOped boot by OPED is revolutionising the way we manage foot and ankle fractures and is now considered the gold standard for treatment of Achilles tendon ruptures. Unlike conventional treatments, the VACOped allows the foot and ankle to remain dynamic while still providing the support necessary for a full and quick recovery.

The VACOped utilises VACO12 technology as a main feature of stabilisation. The VACO12 system within the VACOped uses as many as 20 million small polystyrene beads that each make contact with up to 12 other surrounding beads. Energy is transferred along the poly beads but is dispersed and weakened as forces are absorbed from bead to bead.

This limits the chances of movement within the boot due to impact. Like a bean bag, the liner is filled with polystyrene beads that mold around the foot and leg of the wearer. Air is vacuumed out of the liner so that the poly beads contour around the foot and ankle to provide customised protection. This works with a rigid plastic outer shell to make VACOped very cast stable for the wearer. 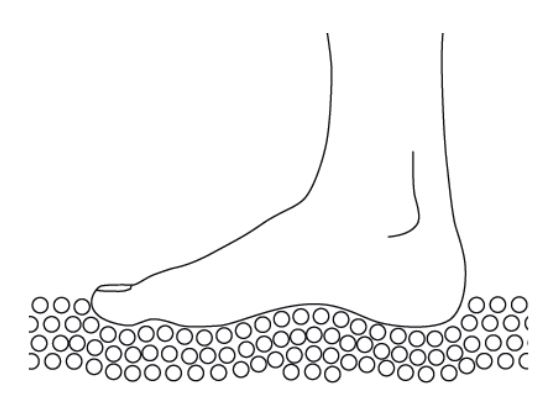 The VACOped is unique in that it can easily be removed and reapplied. Physicians are able to easily check the fracture site, and physiotherapy can be done at any time. The simplicity with which the VACOped can be removed and reapplied not only means that patients are also able to wash their limb, but the removable liners which cover the vacuum cushion can be easily washed and replaced.

The vacuum technology used in the VACOped’s fracture stabilisation system ensures the boot will re-mold perfectly to the shape of a patient’s limbs, no matter how many times it is removed. The removable sole of the VACO range of boots means they can also be worn at night without soiling bed linen.

The vacuum stabilising system VACOped consists of a modular, honeycomb shaped plastic shell and a vacuum inlay that together offer stability equivalent to a plaster cast. The co-operative patient can put on and remove the VACOped independently. Physical therapy is also possible to preserve dorsiflexion/extension in the ankle joint in the early post-operative phase. Various adapters on the posterior range of motion (ROM) hinge enable restricted dorsiflexion/extension while maintaining lateral stability. 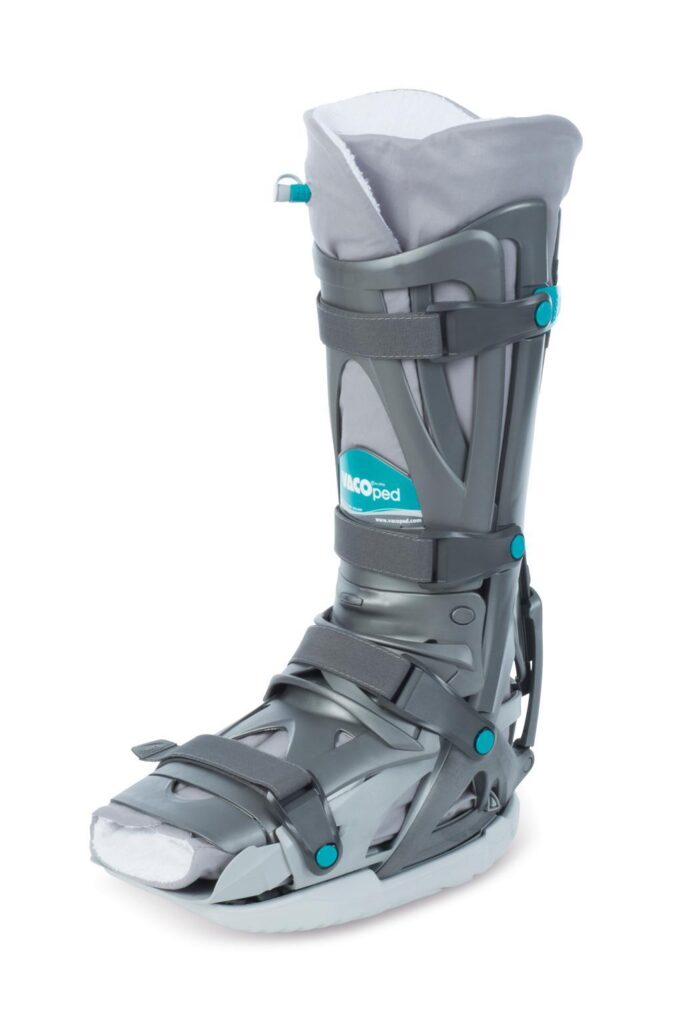 What foot and ankle conditions does the VACOped address and how?

The VACOped was primarily designed and engineered for the treatment of the Achilles tendon rupture. The Range of Motion (ROM) hinge allows the practitioner to set the ankle at different angles of plantar or dorsiflexion and allows for free ROM or a controlled degree of ROM.

Controlled joint movement is an important part of the late rehabilitation phase, allowing the joints and muscles to gradually regain strength. Unlike other conventional treatments which do not allow for any movement, the VACOped ROM function can be set in increments of five degrees.

In the study by Dolphin et.al. Patients who were treated with the VACOped showed better tendon quality post-treatment as well as a decreased rate of re-rupture

The frame design in collaboration with the vacuum cushion allows for cast stable immobilisation in the boot. Unlike other conventional treatments which do not allow for any movement, the VACOped‘s ROM (range of motion) function can be set to allow the patient to walk normally with the boot in situ and ROM at the ankle. This allows the muscles to regain strength and reduces the rate of thrombosis as the calf muscle contracts through gait and moves blood back to the heart.

How does the VACOped differ from existing technology?

Currently Achilles ruptures are treated in an emergency department with a plaster of paris backslab, the ankle is set in plantar flexion and a crepe bandage wrapped around. In the following days, the patient will attend an orthopaedic clinic where they will be fitted with a CAM walker and a heel wedge. Generally these heel wedges are a stack of 3 or 4 wedges connected to one another but which can be pulled apart. The wedge is positioned under the heel and encourages the ankle into plantar flexion. Because the wedges are bulky and the boot is designed for an ankle in the 90 deg position, the walker and wedge can become ill-fitting and uncomfortable for the patient

The alternate treatment to this is to use a goniometer to measure 30 deg of ankle plantar flexion and the patient has a full plaster cast or synthetic cast applied to the leg. Every two weeks the angle is adjusted by 15 deg until the patient reaches the neutral position. Limitations to this method are: Time to apply the cast, remove and re-apply at least twice. A skilled cast technician is required to set the cast and perform this method. Further limitations include the patient cannot weight bear at all in the cast, particularly when it is set in plantar flexion. This results in the atrophy of the foot and leg muscles.

The VACOped boot represents the modern standard of care for foot, ankle and Achilles injuries. With the ability to provide cast stable immobilisation and a short application time. The VACOped also offers an ankle range of motion function (-15° to +30°). Because the modular boot is designed to move and flex at the ankle it allows true plantar flexion without the ill-fitting nature of the walker and wedge method described above.

VACOped allows for greater freedom of movement than a plaster cast as it can be removed for hygiene reasons or a practitioner wants to check a wound. The total contact nature of the device can significantly reduce recovery times as seen in the study by Honigmann et al.

For more information on the OPED range of boots including the VACOped, VACOcast and VACOpedes, call us on 1300 866 275 or email info@oapl.com.au